Youth and Nationalism in Lesotho 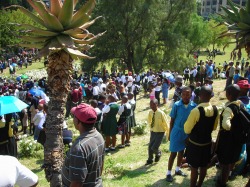 School children on Moshoeshoe's Day, 2009
My current projects focus on the issues of development and border-crossing as they relate to personal and national identity in Lesotho. An article that came out in 2014 in the Journal of African History looked at the impact of development rhetoric and foreign assistance on the evolution of political forms in early independence Lesotho, as well as their impact on rural Basotho's understandings of citizenship. A second article, still in draft form, looks at attempts by people in South Africa to enter late colonial and early independence Lesotho--migration in reverse from that usually studied in southern Africa of people trying to get into South Africa for work. It looks at the lack of governmental control over this process, and the inability of either the colonial or independence governments to deport even the most politically unpopular immigrants/refugees because of global and local anti-Apartheid sentiment.

Both of these projects are helping me transform my thesis into a book manuscript arguing that engagement with global ideas and actors from across the region and the world helped local people in Lesotho give concrete meanings to previously abstract concepts like independence and national citizenship. In short, the argument of the manuscript is that the process of building a state with porous borders and dependent in large part on foreign assistance made Lesotho less an enclave within South Africa than a great place to examine the intersection of local conceptions of nationalism in a globalizing world.

My dissertation research focused on the interaction of young people with the state and the idea of nationalism from 1952 to 1970 in late colonial and early independent Lesotho. My dissertation, entitled Re-Imagining the Nation: Youth, Independence and the 1960s in Lesotho, assessed the experiences of young Basotho and argues that traditional ways of evaluating nationalism, by focusing on politicians and political parties, does not really encompass the experience these young people had living through a time of change and reevaluation. Instead of seeing nationalism as a force through which political parties and leaders attempted to join together a disparate group of people into a 'nation', my work showed how these young Basotho envisioned the process of 'nation-building', how this diverged from the conceptions of British administrators in Lesotho and London as well as from the conception of Basotho political parties and what that meant for the level of engagement people had with the state. I argued that it is incorrect to see people's lack of engagement with the state as a failure of nationalism, but rather a failure of governmental institutions, to adequately deal with the change in status of people from subjects to citizens. This re-conceptualization better explains how people can identify strongly with some elements of the new nations while still feeling estranged from the national community and the government.

I conducted my research in Lesotho on a Fulbright-Hays grant and while there consulted with governmental, church, university and private archival collections gathering information on youth from a variety of publications and documents. In addition I interviewed over thirty Basotho who were young during the time of independence. Using these oral voices helped me bind together and challenge the conceptions of a unitary, top-down nationalism put forth by the colonial and post-independence governments, churches and political parties. The oral voices also allowed my work to make sense of how the nearby (and sometimes very present in Lesotho) struggle against the apartheid regime in South Africa affected the thoughts and actions of young Basotho. These voices also highlighted the importance of international ideas like Pan-Africanism, anti-colonialism, anti-communism and development to the emerging political and social consciousness of young Basotho.