I have written a series of commentary pieces on Lesotho’s politics, development, and sport

2015: Is this the Maturation of Politics in Lesotho

2017: Lesotho Elections--Maturing Democracy or a Failure of Institutions?

2017: Overpopulation is not Lesotho's Biggest Problem

These pieces were at times solo authored, but I also have worked with Charles Fogelman, a lecturer in Geography at the University of Illinois, Urbana-Champaign, Nora Kenworthy, an assistant professor of Nursing and Health Studies at the University of Washington Bothell, and Jeffrey Smith who was at the Robert F Kennedy Center for Justice and Human Rights in Washington DC.
﻿﻿

2014 Media Appearances
I have appeared in a number of media articles since the flare-up of political violence in August/September of 2014 in Lesotho (which some called a coup).
Radio France International Interviews: One and Two
Appearances in South Africa's The Daily Maverick: Here and Here
Yahoo News/Agence France Press
Jeune Afrique Article
Xinhua English-language service

I was interviewed for two stories that ran in international media after the historical elections of May, 2012 that returned Lesotho's first coalition government to power. Links are provided below to the article in South Africa's Mail and Guardian newspaper, and to Radio France International's audio clip: 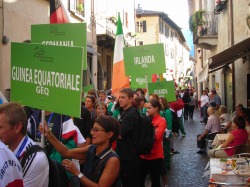 The athletes' parade at the 2009 IAAF Mountain Running Championships
Links to my articles on RunningTimes.com.

Series on the 2009 Comrades Marathon (each of the items below are links that will take you directly to the articles):

Article 1: "An American at the Comrades Marathon"

Article 2: "Why Comrades is the Greatest"

Article 3: "The Heroes of Comrades"

Article 4: "Training for the Comrades Marathon"