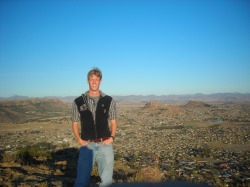 Maseru, Lesotho
I am currently an assistant professor in the Residential College in the Arts and Humanities at Michigan State University (USA). My manuscript, tentatively entitled The Desire for Development: Foreign Assistance, Independence, and Dreams for the Nation in Lesotho is in production with the University of Notre Dame Press and should appear in early 2018 in print.

I completed my Ph.D in the Department of History at Washington University in St. Louis and then taught for three years at SUNY Cortland where I taught a wide range of African and World History classes. My dissertation focused on youth, nationalism and the 1960s in Lesotho, southern Africa. My interests are in the study of nationalism, development, generational conflict, and the role of borders and citizenship.


I came to African History through teaching. I majored in history as an undergraduate at Grinnell College and also completed the coursework and practicum necessary to graduate in 2001 with a secondary education teaching license (that I have maintained to this day). After graduation, I had the opportunity to move to rural Lesotho, southern Africa, to teach for a year at an all-girls Catholic school in the foothills of the Maluti Mountains. While I was not able to teach history there (the school did not offer it), I did teach English, mathematics and chemistry. Living a three-hour bus ride from the nearest phones, email and electricity meant that I had plenty of time to really get to know my students and colleagues at St. Rodrigue High School. I made friends for life and developed an interest in the history and culture of Lesotho. 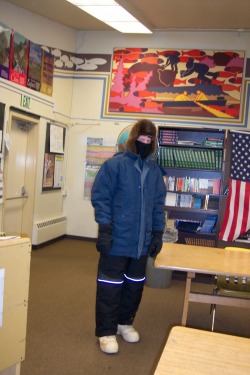 At school, Kwethluk, AK
After coming back to the US in 2003, I took a job teaching junior high and high school in the Yup'ik Eskimo village of Kwethluk in western Alaska. With the nearest road four-hundred miles away, and a non-native English-speaking student population, teaching in Kwethluk was, in many ways, similar to teaching in Lesotho. There were five teachers at the school who taught the entire secondary curricula (grades 7-12) so while I was hired to teach history and social studies, in the two years I worked there, I taught American History, World History, Alaska Studies, Government, English, Math and Physical Education. During this time, however, I realized that my real interest was in teaching African History so I applied to graduate schools.


Accepted at Washington University in St. Louis in the fall of 2005, I completed my coursework and oral exams by 2008 while also taking two trips to Lesotho to learn Sesotho through the Department of African Languages and Literature at the National University of Lesotho (NUL), and to set up research contacts. During the 2008-09 academic year I was awarded a Fulbright-Hays grant to conduct my doctoral research in Lesotho on youth and nationalism during the 1950s and 1960s. I spent time at archives around the country, in South Africa and the UK while also conducting interviews with people who had been part of youth organizations around the time of independence. In these interviews, my prior experience teaching and living in Lesotho came in handy both for finding contacts to interview and for times when I needed translation assistance. For more on my research, click here.


During this Fulbright year in Lesotho, I was a Visiting Research Fellow at the Institute of Southern African Studies (ISAS) at NUL and made extensive contacts with researchers at ISAS in addition to the professors in the Department of Historical Studies. In addition to my own research, I was a regular attendee at the Friday Faculty of Humanities Seminar Series where faculty presented papers on a wide variety of topics, centered around southern Africa. I participated in a panel discussion assessing the impact of the American presidential election of 2008 on the crises in Zimbabwe and the Democratic Republic of Congo. I also presented my own research to the seminar for critical feedback, where it was well received with lively discussion. For a full CV, click here. 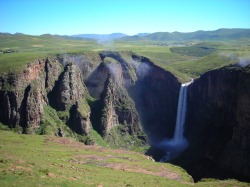 Maletsunyane Falls, Lesotho
I now teach African and World History at SUNY Cortland. In an increasingly global world, students need to understand how our current economic and political systems were built and Africa is central to these stories. My passion is for the people of Lesotho and Africa in general—social history. People make history, and they should be at the center of the story of institutions that are at the core, deeply human. I have taught a wide range of upper level classes, ranging from a general two-part survey of African History to specialized classes on Sport and Nationalism, South Africa and a Transnational 'Slavery in World History' class. For more on my teaching, click here.


In addition to teaching and researching African History, my main hobby is running. I have finished in the top four overall at marathons in Cincinnati, St. Louis, Tulsa, and Clarens, Free State, South Africa. While conducting my research in Lesotho, I also trained for and completed the 56-mile Comrades Marathon, finishing in 177th place out of 10,000 finishers in a time just under 7 hours. I wrote about this experience in a 6-part series for the magazine Running Times. Training for this race also introduced me to the vibrant running community in Lesotho. I made connections with runners and coaches there that I maintain to this day. For links to this writing, click here.